As every racer knows, you have to take the rough with the smooth. Ride the lean periods. Make the most of the good times. Because racing is quite simply an emotional roller coaster and not for the faint of heart.

Looking back, 2018 looked like it was going to be an epic year for reigning Pro Mod racing champion Andy Robinson. In a sport where your overall race last literally seconds and success is measured in thousandths, the dividing line between success and failure is almost microscopically fine. But the team really seemed to be steering a measured path that brought with it consistency and speed. Lots of speed.

Now there is of course a common belief that drag racing is all brute force and ignorance. Build a monstrously powerful engine. Bolt it into a couple of scaffolding poles masquerading as a chassis. Then put a driver, who has a distinct lack of imagination, behind the wheel and tell he or she to bury the pedal. Yeah well how wrong can you be.

Take Andy Robinson’s ’69 Camaro. It boasts the same exotic brew of metals and materials as an F1 car. It too generates a whole bunch of telemetry which is pored over by the team, assessing how to tease out the next hundredth of a second. Add another mile per hour. Naturally that doesn’t come cheap. You also have to appreciate that, unlike other areas of motorsport, even at the top levels, for some reason UK sponsorship deals for drag racers are very hard to come by. So most of the R&D and running costs are funded from the team’s own resources. That’s why at the typical drag meet you don’t see too many Caribbean style perma tans around the paddock. F1 it isn’t. The plain fact is, the money is in the motor.

All that said, if you really do have the need for speed, somehow you make the numbers work. On all levels. That’s why come the Summer Nationals, having seen a steady progression in performance through the season, Andy and his crew chief Luke (who also doubles up as his son!) were feeling, shall we say, a little hot to trot. 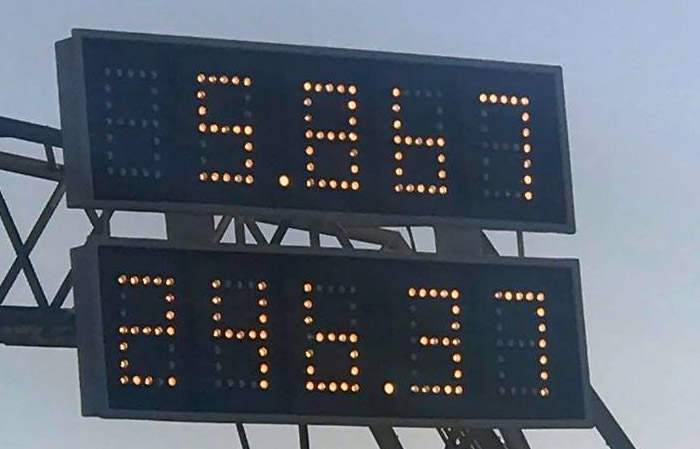 And lo it came to pass. History was made as Andy and the ‘Anger Management’ Camaro blasted off the line and hurled themselves down the pristine concrete surface at Santa Pod to post a record breaking 5.867 pass for quickest ET in British Pro Modified history and a new track record as well.

Could it get any better? Well riding high the guys continued to push themselves and the car, seeking that next almost infinitesimal gain come the next meeting. At the Mopar Euro Nationals a few weeks later, another sub six second run looked like a promise of something better just around the corner, but wet weather intervened and the potential remained unfulfilled. Excitement though was still to be had aplenty as the car managed to keep Andy on his toes with a fairly major sideways moment at around the 240mph mark! 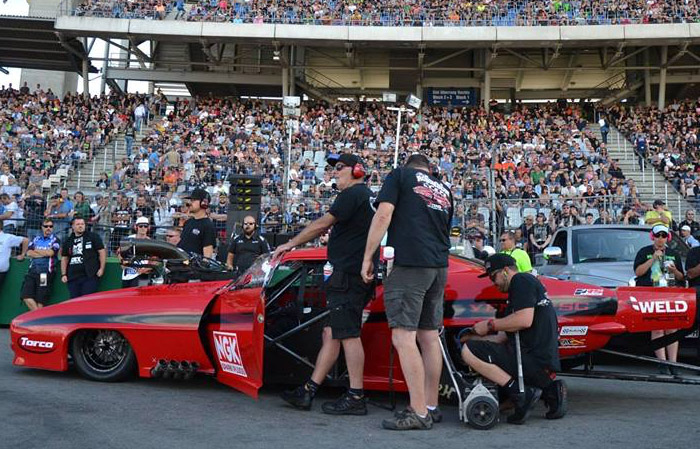 A trip then across the channel to NitrOlympx at Hockenheim in Germany again promised much but didn’t quite come to pass. Those sub six second runs however were becoming second nature.

European Finals for the final round of the FIA championship beckoned next in front of the home crowd at Santa Pod and the roller coaster ride continued. Another string of sub second runs looked promising, but ultimately the settings on a new clutch caught Andy out on the line and he pulled a rare red light. But there was still one more meeting where anything might be possible…

The National Finals in October were not exactly bathed in sunshine, except in the Robinson camp! By qualifying in number 1 position they had clinched a 7th MSA Pro Mod Championship. A feat unmatched by any other racer. Andy Robinson was truly in class of his own. Weather however worked against the guys as they were making one final push to steal more time off the clock. Much delayed by the conditions, their last run of the day was held under floodlights with many spectators having left as the temperature headed south.

And that’s when the roller coaster ride took on a whole new meaning.

In the final round against Chris Isaacs, the car made contact with the right hand barrier and turned hard left, at which point the air got beneath the car at around 210 mph. At that point the accident became scarily reminiscent of Mark Webber’s accident at Le Mans in 1999. There too air had got underneath his Mercedes cars, its flat bottom helping to launch the car skywards.

Andy’s flight in the Camaro was at a slightly lower trajectory, though momentarily it had looked as if he might vault the finish line gantry. Fortunately the gods were smiling or perhaps the demons were just down the pub, but the car landed upside on the passenger side, sliding along for some distance before coming to a stop on all four wheels. Andy, with typical sang froid, calmly turned the engine off before exiting unscathed with the help of the fire crew who arrived moments after had the car had halted its wide ride.

And so the season ended.

A best ET. A fastest speed. A track record (albeit briefly). A seventh championship title. Andy inducted into the Drag Racing Hall of Fame (oh yeah we forgot to mention that amongst all the other achievements). And now a big rebuild.

But most important of all, Mr Pro Mod Andy Robinson had ridden the roller coaster and walked away to race another day.