NGK were very fortunate this year in being able to gather together a sparkling array of two and four wheel drag racers for the Goodwood Festival of Speed. Don’t get us wrong, they are all deeply impressive pieces of kit, but the drag bikes it has to be said always grab our attention as they are in many way quite preposterous solutions to the problem of going fast.

But parking the engineering for a moment, we’d like to focus on the rider of two of the bikes we were privileged to have on show. The gentleman in question is one Dennis Norman, or as he was better known, “Stormin’ Norman. Dennis’s story is worth the telling for several reasons. First perhaps is that he is one of the few competitors to be inducted into the British Drag Racing Hall of Fame. This honour was bestowed on Dennis in 2014, just four years after he’d hung up his leathers (supposedly for good). 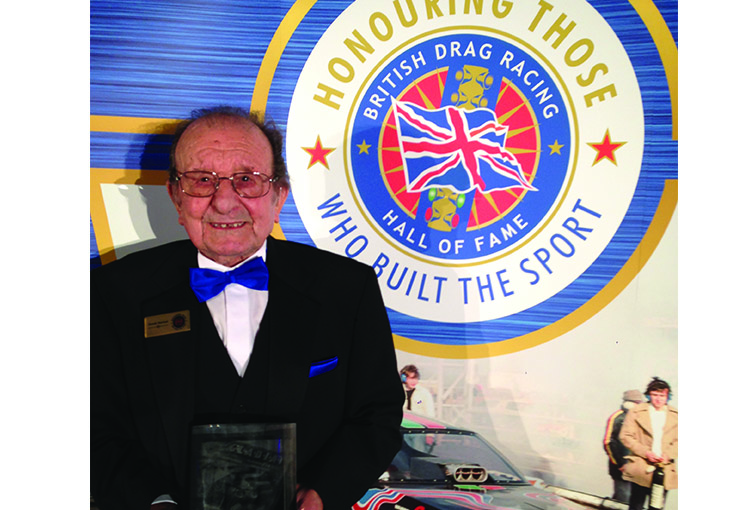 Secondly, if we tell you that Denis was a despatch rider instructor at the end of World War Two, you might start to do the sums yourself and yes you’d be right. Dennis was still doing demo runs of his beloved Conquest 1 bike up until the age of 85! In doing so Dennis has earned a reputation for being not only one of the oldest drag bikers around, he also one of the first. In fact Dennis could well be considered to be one of the founding forces of the British Drag racing scene. Back in the day he worked tirelessly alongside the management of a newly emerging drag strip on the site of an old US Air Force Bomber base outside Northampton. And so Santa Pod was born. 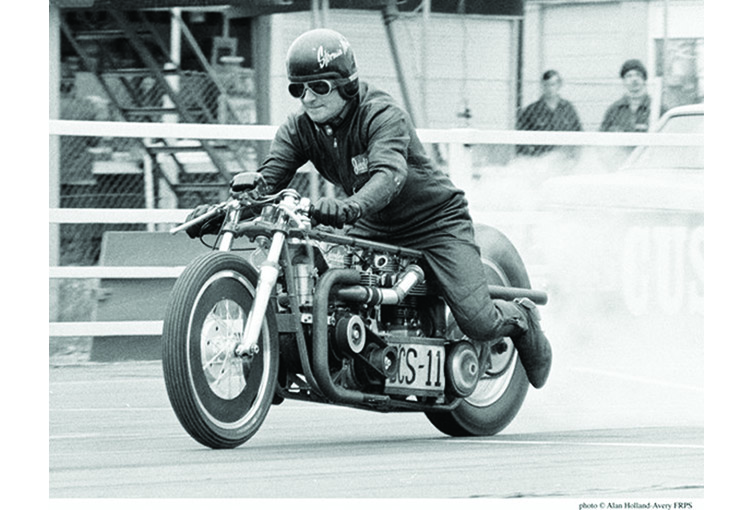 By now you have probably gathered Dennis was a man of action. Having dabbled with various forms of two wheel competition – Grass Track, Speedway and Sidecar etc., he got involved in the ‘new’ sport of sprinting…his first bike in the very early 1960’s was a supercharged Ariel square four. Regarded by many as the first real purpose built sprint bike he set many records for 1,000cc at Elvington and Duxford, some of which still stand! 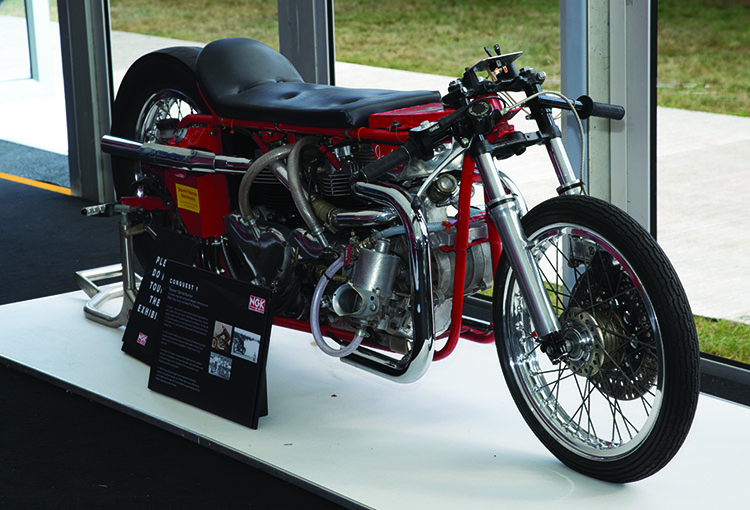 But drag racing was the thing that really caught his imagination and he set about building one of the first double engined bikes to appear in Europe, so in 1965 Norman’s  ‘Conquest’ was born. In his quest for speed he coupled two 650cc Triumph engines together, added a supercharger and fuel injection set up and ran the bike through a single speed gearbox. The combination of power and that single speed gearbox made life interesting and the result was clear to see. Dennis rapidly gained a name for smoking the rear tyre for 200 to 300yds – hence the nickname ‘Stormin’ Norman which has stuck ever since.

For a first effort, Conquest 1 was very successful. It’s claimed it was the first double engine bike outside of America to run under 10 seconds and was the 3rd bike in Europe to run a 9 second ¼ mile pass ! 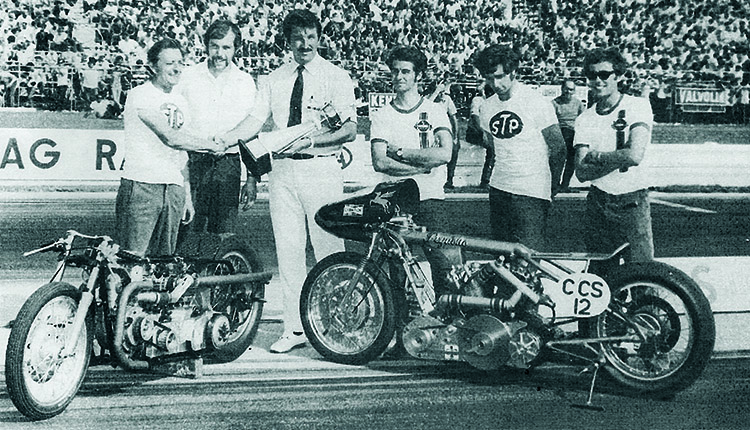 Such was Dennis’s fame that in 1970 he was invited to race in America and at Indianapolis raceway he was (and still is) the first foreigner to ever qualify in the top eight and therefore race in the finals. While ‘over there’ Dennis observed a new phenomenon which he bought back and introduced to drag racers in the UK. It was the bleach ‘Burnout’. Never seen here before in the UK, this startline show added to the burgeoning appeal of the sport and consequently again set the standard for the future and has become very much part of the ‘show’ for spectators.

Dennis continued campaigning Conquest for a few more years until in 1973 Norton came knocking. They wanted him to build a new bike, but this time powered by two of their ‘new’ 850cc Commando engines. Unfortunately reliability wasn’t their strong point and development took many years as the bike was very much ahead of its time and employed a lot of the latest new technology of the day. 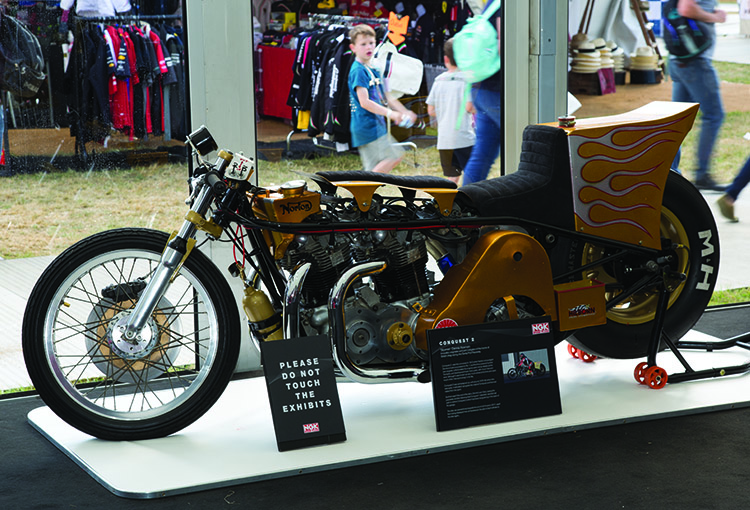 Ultimately Conquest 2 was campaigned up until around 1979 ’80  when Dennis retired and ‘mothballed’ the bike alongside the original Conquest.

Having sold his business and retired fully, the family having grown up and gone their own way, Dennis found twiddling his thumbs wasn’t fulfilling enough so he found himself something to do…

In 1992 decided to rebuild his original Triumph ‘conquest’, brush off his leathers and start doing demonstrations and exhibitions at Sprint meetings around the country. Not surprisingly as Stormin’ fever grew, so did the enthusiasm and interest for old drag bikes. Seemingly overnight other competitors were dusting their old bikes off and running them again. Who says nostalgia ain’t what it used to be and leading from the front was Dennis, still riding in anger and smoking the rear tyre at over 130mph at 87 years of age ! 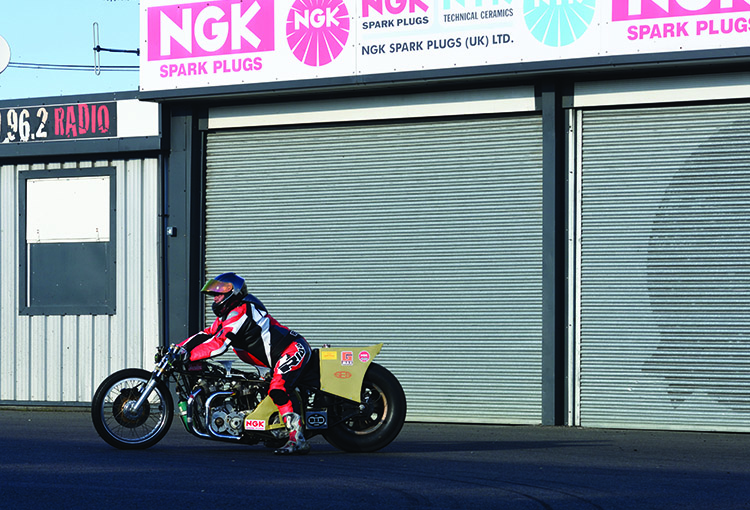 With Conquest cajoled back into life and seeing the popular following it had gained, Dennis’s son and grandson then set about rebuilding Conquest 2 which was completed last year. With several encouraging test runs under their belt, three generations of ‘Stormin Normans’ are now looking forward to appearences at Dragstalgia and other events.

That promises to be an event not to be missed, so keep an eye out for further news of when Norman’s conquests will be heading trackside. Meanwhile we take our hats off to Stormin’ himself who visited us at Goodwood and even got his leg over his favourite Conquest. Quite an achievement at 92!