If it looks quick it probably is

The need for speed. Guess if you’re reading this there’s a good chance you’ll have felt that need yourself at some time. It’s the kind of thing petrol heads hanker after. It sort of defines them. Unites them.

Chasing down that same need for speed also shapes things in other ways and often the monkey on the back of that pursuit is air. Plain old air. Can’t see it. Or touch it. But try and push through it and it makes its presence felt. And some.

Now it took a little time for that realisation to dawn, but once it did those with a mechanical bent and a desire to go fast realised that somehow or other you had to work with the air. Cajole it. Stroke it. Persuade it to go round rather than present itself as a wall. Aircraft designers were among the first to recognise the forces at work. Not surprising really when it was harnessing those same forces to enable them to get their inventions into the air. Designers like R J Mitchell, creator of the Spitfire, demonstrated that understanding so eloquently in the shape and form of possibly the most famous aircraft of all time. 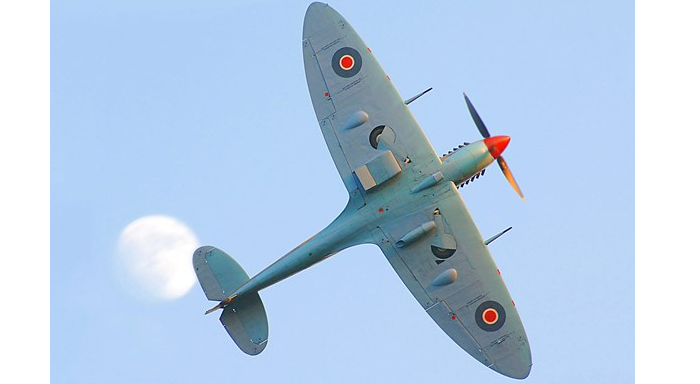 And the same could be said of Concorde. A shape defined by the very environment in which it operated and its need to break what had for many years thought to be impenetrable. The sound barrier.

All credit to the fly boys, but they weren’t the only ones who understood the forces at work. Early on came the realisation that aerodynamics had a role to play on four wheels and two. While Mitchell’s invention was barrel rolling through the sky, below him designers were travelling that same road and on it. Granted, sometimes the interpretation was more fanciful than practical, but some creations – perhaps embodied no better than in the work of the French coachbuilders Figoni & Falaschi – looked as if they were topping the ton without even turning a wheel!

Then you had those gifted designers who like Leonardo da Vinci, could apply their imagination and skill to seemingly anything. Enter Alex Tremulis.

Chicago born Tremulis had a prodigious talent for design. So much so, in fact, that by the time he was twenty his designs for custom-made Duesenberg’s were being turned into reality.

From that point on he pursued a career that, while it intersected from time time with the major manufacturers, generally followed a route of working with independent design studios and high-end builders of custom cars for Hollywood stars and the like. It was only the war and his conscription in the the Army Airforce that interrupted his burgeoning career and it began to take another turn. In the Army Airforce his talent was rapidly recognised and he eventually found himself working on top secret aircraft designs, an example of which is the Vertical Take Off Interceptor. To have an idea of what he was proposing you need look no further than Tesla founder’s Elon Musk Space X project which recently landed a used rocket booster in exactly the way Tremulis had described in his proposal back in 1944… 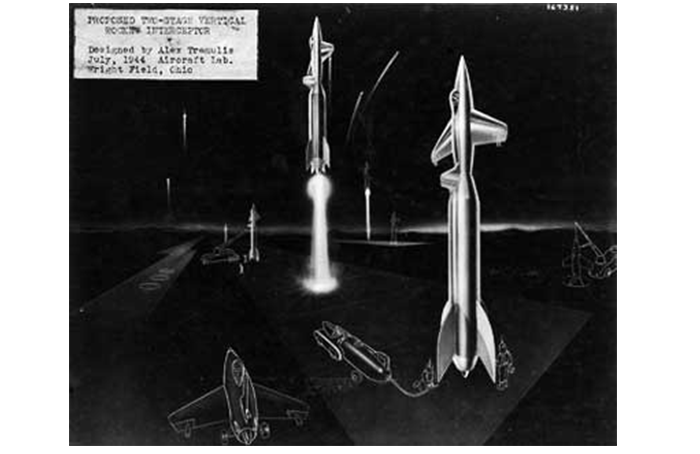 After the war though the siren call of Tremuli’s first love called him back to the automotive world working on a series of projects for a variety of manufacturers, not the least of which was the ill fated, highly futuristic Tucker Torpedo. 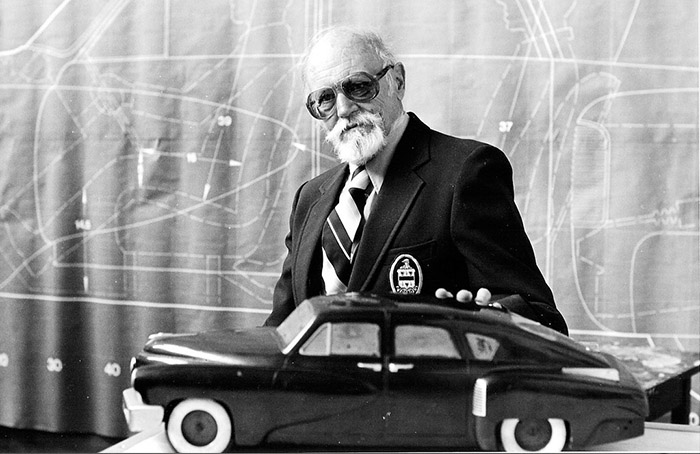 Tremulis then trod a more stable path and joined Ford staying there for more than a decade. But while there his imagination showed no signs of fading. Rather, he continued to push the boundaries still yet further,  revealing the two-wheel Ford Gyron which was first shown at the 1961 Detroit auto show. 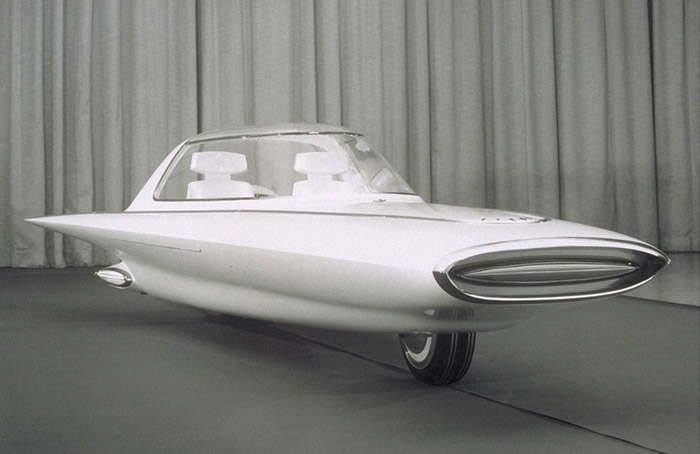 And this is where this automotive shaggy dog story starts to draw to a close, for it was the Gyron that became the basis for the design of a two wheel world land speed record contender, the Gyronaut X1.

Much like the Figoni & Falaschi creations mentioned earlier, the Gyronaut looked the epitome of speed even while standing still. It’s futuristic design sought to cleave the air and in the process propel its driver Bob Leppan into the record books. Two years after it was first revealed the X1, powered by two Triumph engines, achieved its objective by breaking the record and posting speed of 245.667mph. 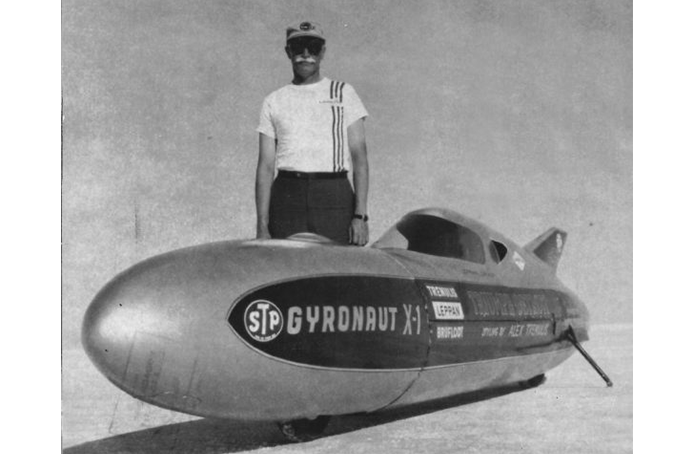 Of course that record then became the focus of hot competition and indeed was toppled four years later. Unsurprisingly the Gyronaut team returned in an attempt to retake the record and though they started with a potential record breaking run, disaster struck and the Gyronaut crashed at over 260mph. Mercifully Leppan survived the crash, due in no small part to the roll cage designed by Tremulis. The Gyronaut’s glory days were over…

The wreckage remained untouched for years until Alex Tremulis’s nephew Steve bought it to set about its restoration. Working together with Bob Leppan, the duo have bought the Gyronaut X1 to life again. And as it was in the day, it is today. A real knee trembler and the epitome of the need for speed.