King of the Strip

Ian King is relative rarity in the world of drag bike racing. Rare because of the level of success that he has achieved. And rare because he has beaten the Americans at their own game. And that doesn’t happen very often on the strip.

Top Fuel drag bikes are, like their riders, a breed apart. They are the fastest accelerating machines on two wheels. Custom built 1000 horsepower engines blast them from 0 – 60 mph in 0.7 seconds. Onto 100 mph 0.4 seconds later. And onto 250 mph in under 6 seconds. 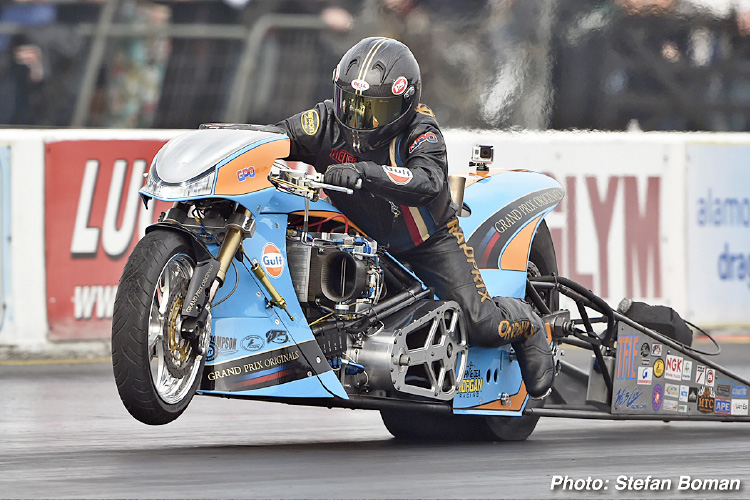 They pull 3g off the start line. The front wheel is next to useless for the purpose for which it was intended. So riders steer by hanging off the side of the bike, using their bodyweight to balance and steer. At 250mph. As you do.

Using their bodyweight to balance and steer. At 250mph. As you do.

Back to Ian. 2014 has been an outstanding year. Already seven time and reigning European Top Fuel Bike Champion, Ian took on the might of the US travelling to Valdosta in Georgia in April (check out the video below).

There he became the eighth and final member of the MTC five second club when he posted an incredible 5.878 on his way to winning the event.

Then at Hockenheim in Germany, the team went onto to stop the clocks at 252.57mph – the first Europeans to break 250.

With a season’s start like that there was only one way it was going to go. Another championship appears in the bag at the European Finals at Santa Pod. Their third in succession.

Can anybody stop the king? That’s the question on people lips as 2015 looms large on the calendar. But with NGK on board what’s to stop him?