The are some people who always seem to be in a perpetual state of motion. Seeking new challenges. Pushing their personal envelope. Maria Costello is one of them.

When you consider that she has over a quarter of a million people following her Facebook page, you start to understand just how much Maria puts herself about. In the nicest way possible! Mind you you’d have to be quick to catch her, because she’s invariably moving at a quite a lick. Either on track or between the many other involvements she has off track. And 2018 was no different. 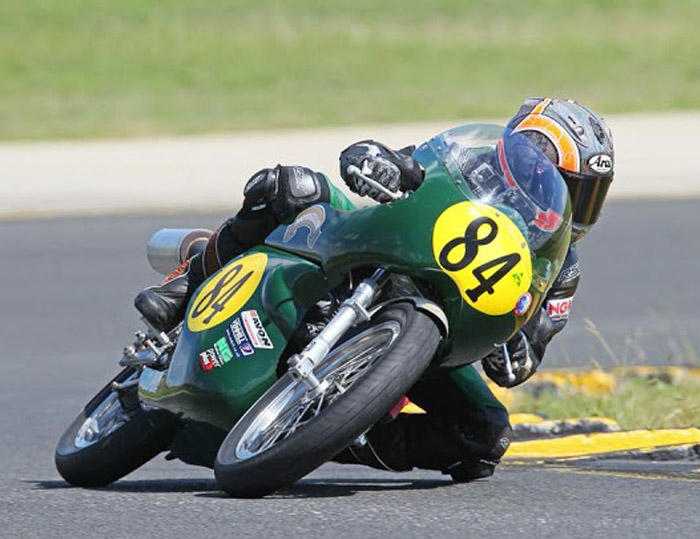 With a reputation as a fearless road racer, gained on the ultimate test of all, the Isle of Man TT, Maria is in demand where ever two wheel fans meet. So March saw her heading down under for the International Festival of Speed at Sydney Motorsports Park. Over five races she came in second overall and secured a firm invitation to join the Moto Gallur team next year. They didn’t have to ask twice.

With barely time to have shaken off her jet lag, Maria was homeward bound for a four wheel encounter of an Austin kind in a ‘Works’ HRDC Austin A30 ‘Academy’ racer at the Historic Racing Drivers Club event at Silverstone on Easter Sunday. This was to be her first full race meeting after her brief debut last year was curtailed on the start line with a mechanical failure in the Austin A35 celebrity challenge at the Silverstone Classic.

With two races successfully completed, the four wheel racing bug had truly bitten leaving her full of anticipation for her next race at the Donington Historic Festival. 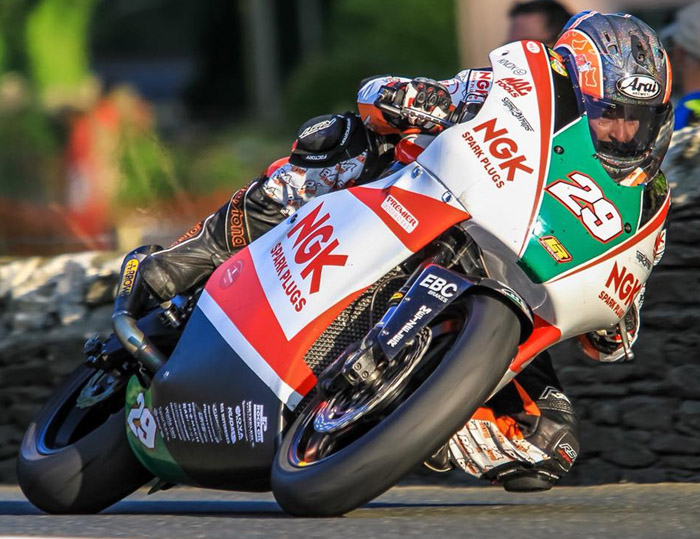 But first she had an appointment with one of the big road racing events of the year. The Vauxhall International Northwest 200. The Northwest is favourite race meet of Marias and it showed in her lap times. But mechanical gremlins struck in both races leaving her sidelined and not a little frustrated. But not being one to let a setback like that put her off, she was then focussing on her next big challenge, the TT.

Unfortunately the gremlins where not put off by the trip across the water to the Isle of Man. Once again they made an appearance which led to her retirement on lap three, after having already forced her to start in 44th and last position,  unable to set a competitive qualifying time as a result of the electrical issues that dogged her all weekend.

But there was an upside to be taken from the Isle of Man and that was meeting with HRH Prince William at the start line for her race.

“I was honoured to meet him, it helped with my pre-race nerves. I couldn’t help but mention that I’ve met his Dad and we talked about our music interests. I was even more blown away when I found out he’d waited for me to start the race.” 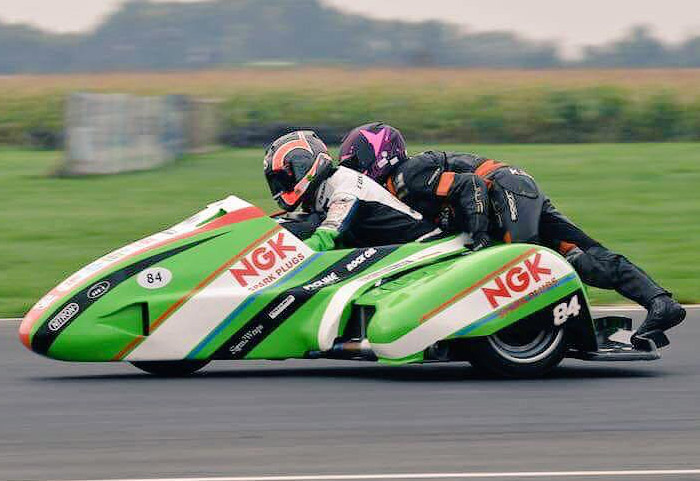 Undeterred, Maria had a reappearance on the island scheduled to compete at the Southern 100 race meeting riding the Team Beugger Paton in the Classic TT and her sidecar outfit. In 2016 Maria had previously made history at the event when she became the only female racer ever to earn a place on the Classic TT podium alongside winner John McGuinness. A further claim to fame that won’t be forgotten in a hurry. Last year she nearly claimed another podium finish missing out by only seven seconds.

With a brilliant start Maria found here way from 10th to 2nd on the first lap. Prospects were looking good for another podium finish. Then on lap three her bike developed gearbox problems that proved insurmountable and so came yet another retirement.

Of course frustrations like that are part and parcel of racing, but there must have been times when she thought ‘give me a break!’ But as ever there was little time to dwell on what might have been. The show must go on.

September started on three wheels with an outing at Castle Coombe on her three wheeler. But no prizes for guessing what came next. Yep another mechanical failure led to another DNF weekend. That led into the Revival meeting at Goodwood where she rekindled a love affair with a 1929 BMW R57 (500cc) with supercharger whose other defining feature was a hand shift. It takes all sorts! 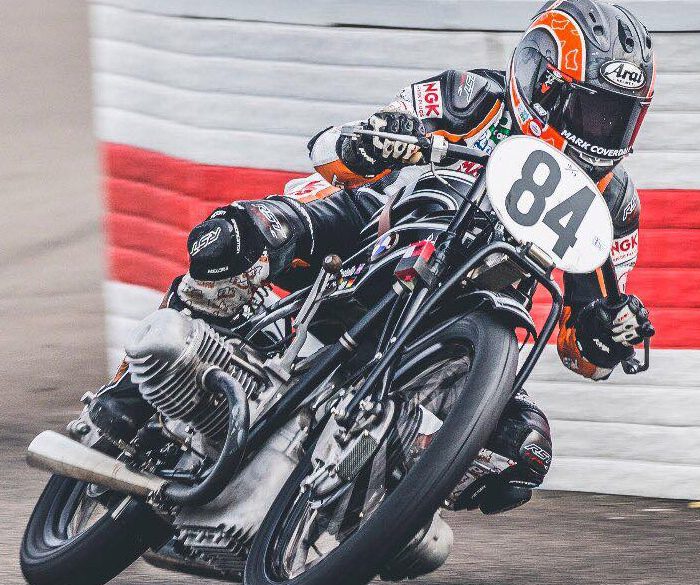 A trip to Croatia was next on the cards to compete in the Grab the Flag meeting on one of her favourite bikes that Beugger Paton. This time the gods were smiling Maria and she took a win in the Premier 500 class. At last not just a finish, but a result! But more was to come. 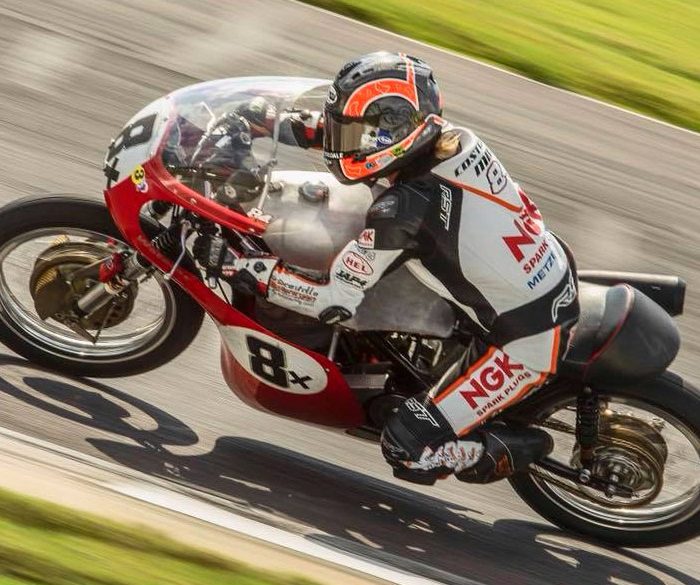 A few weeks later she was heading for the Barber Motorsport Park in Alabama to compete in the American Historic Racing Motorcycle Association Premier 500 class. Obviously this woman doesn’t suffer like us mere mortals with the likes of jet lag as she raced to a great fourth place on a 1974 works Norton. And that finally marked the end of her racing season. 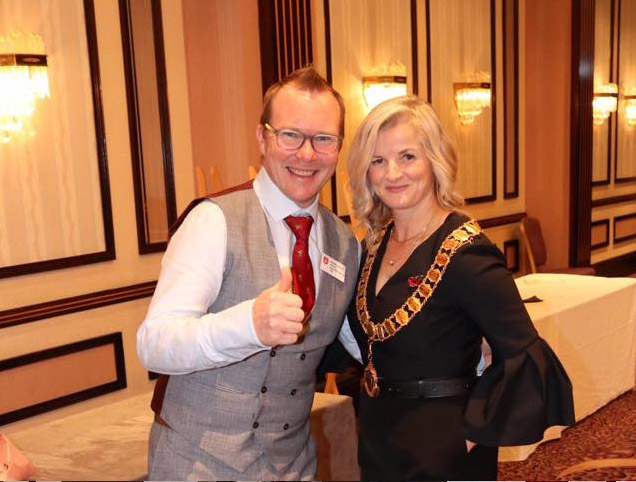 Of course what we have failed to mention is that outside of racing her heart out, her countless other appearances at the likes of the Silverstone Classic, The Goodwood Festival of Speed, hosting her Women on a Motorcycle events and then to cap it all her being appointed the 2019 President of the TT Riders Association and for those who are unfamiliar with the body, the TTRA is dedicated to providing financial and other support to TT racers & ex TT racers who need it following injuries or ill health.

That was 2018 for Queen of the Bikers. In some senses a year of unfulfilled promises but in so many other ways, a year that exceeded expectations. As for 2019, well you’ll need to be up early to keep up with Maria so you’d better set that alarm clock now!