There are certain professions which tend to suggest that it is unlikely that the practitioner is unlikely to enjoy a long life, untroubled by injury. One that instantly comes to mind is stunt rider. The fact that someone should have worked in the business for almost forty years and still be in one piece suggests that they are either very good, very careful or they bounce well.

Enter Tony Baily and his protégé, son Brandon. This mini stunt dynasty front two of the foremost stunt display teams in the country, Moto Stunts International and Stunt Riders International. Why two? Good question and one that we asked.

Well Tony, who has been in the business of thrilling people for forty years, started his stunt career as a member of an Army motorcycle display team. On leaving the army, he and two ‘muckers’ joined forces to develop an idea they had for taking the display riding skills they’d learned to the next level.

Scant months later, in May 1978, one of the original trio, Robin “Smudger” Winter-Smith, found himself winging through the air at Elstree Aerodrome,  North London, on his way to jumping 31 Ford Escort vans. Moto Stunts International had arrived and so they continued.

Over the following years they thrilled successive audiences with daredevil performances including in May 1982 a jump over 118 volunteers laid side by side. Not content with that a few months later 16 double decker buses were given the same treatment.

Stunts like this obviously aren’t just a matter of pitching up, giving the bike full beans and hoping for the best. There’s a fair amount of maths and engineering too, like estimating the angle and length of ramps – the ‘exit’ speed. It’s an aspect that Tony excels and revels in and is integral to the ever more challenging stunts the team are attempting. Then of course there’s the preparation of the bike or the vehicles themselves, an aspect which the riders and drivers take particular interest in. Can’t imagine why…

Over the following years, Tony’s engineering ingenuity has led Moto Stunts International into a more specialist areas of stunt performance, developing both bikes and vehicles capable of performing more specialised and extreme stunts, as well as training and consulting on various film productions and TV shows.

Meanwhile Brandon, who’s stunt riding career started at the age of seven, has developed a parallel stunt team. The Stunt Riders, whose performance is less extreme and therefore requires less space, is no less a crowd pleaser. It’s a format that has proved advantageous and led them to performing, together with the Moto Stunts boys, to a packed crowd in the middle of Oxford Street at London’s New Year’s Day Parade. Another first for the team and one that will be repeated again at the end of this year (make a date in your diary). 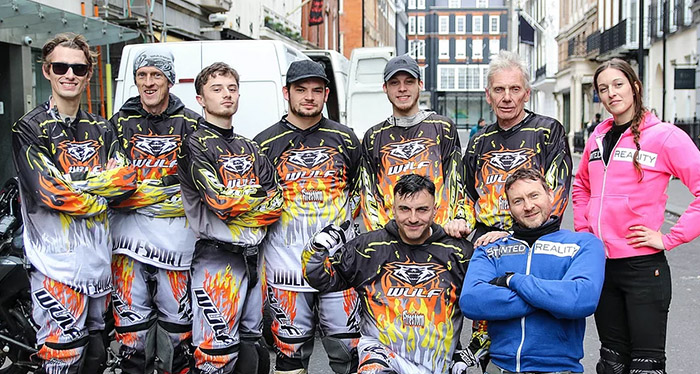 Brandon, whose ‘stage’ name is Brant Dryver (no we don’t why either), just like his band of merry stunt men, doesn’t do this full time. He, like the rest of them, has a normal day job (apart from the youngest rider who is just 14), so they only come together to practice and perform. Not for the money, but for the thrill of it!

Their season is fairly short and for obvious reasons. Slippery tarmac and grass don’t mix particularly well with the precision riding that the stunts require. So from the end of April to the end of August life gets pretty frenetic putting on the 30 or so shows up and down the country.

For Brandon this double life as a stunt rider has also taken another interesting twist. He’s now developing another parallel career (yes that’s three in total) as a motivational speaker and safety trainer in schools. It doesn’t take much imagining to think how he captures their attention during one of his sessions which we bet gets a bit more attention than double algebra! 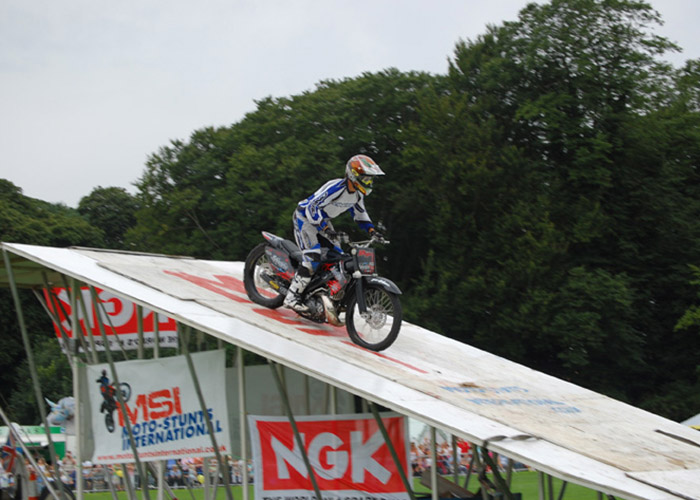 Which brings us to NGK’s involvement. We’ve been sparking the team for a few years now and for good reason as Brandon explains:-

“The one thing you don’t want to have second thoughts about when performing is whether your bike, quad or car is going to do what you want it to. You have to have total faith in that when you open the throttle the engine is going to respond cleanly and predictably. Having NGK fitted gives us that confidence and reliability we need to concentrate 100% on the performance.” 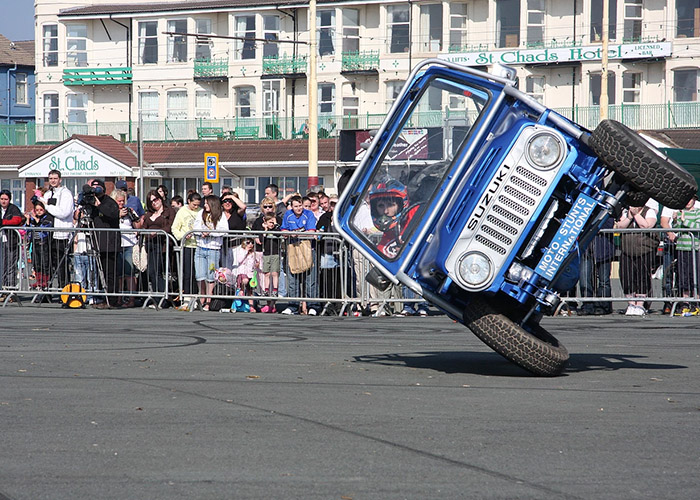 At the still tender age of 27, Brandon has a few more stunts left in him. Indeed if son follows father, he won’t be hanging up his leathers for quite some time. Another plus is that it seems there’s no shortage of wannabe stunt riders knocking on his door, so keeping the momentum behind the team is unlikely to become a problem.

With performances starting from just£1050 a day, it’s no wonder that there’s a constant and growing demand for teams like The Stunt Riders. If the idea appeals check them out at their website www.thestuntriders.com.