Not just the fairer sex but faster too...

Last issue of Torque we took a gentle walk into a potential minefield by pondering if their ability to multi task can give women an extra edge in competition?

Of course the area that we’re most interested in here at Torque is motor racing in all it’s forms. And when we look around there is actually one form of motorsport where women not only compete on an equal level, but win and win big. It’s the sport where drivers are racing cars whose horsepower is counted not in tens or hundreds, but thousands. 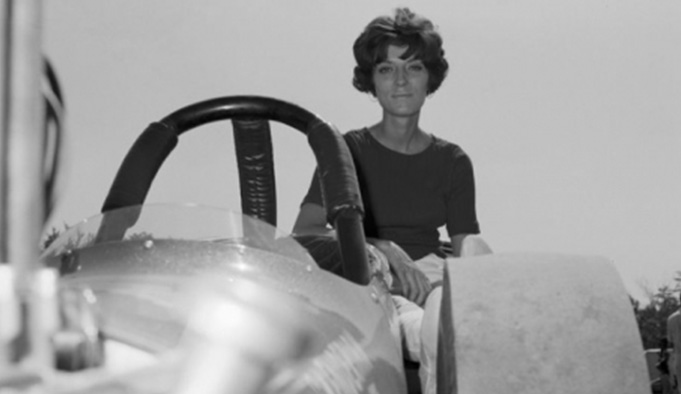 From early on women seem to have been drawn to a sport that gives the impression of being fairly macho. Drag racing. One of the first to make her name was one Shirley ‘Cha Cha’ Muldowney, also known as the “First Lady of Drag Racing. Born in 1940, she gained her licence in 1965. She first made her name racing “funny cars” then moved onto the fastest category of all, “Top Fuel”. Her career included hoisting several national championship titles and one particularly horrendous crash that in 1984 nearly ended her life. Amazingly she recovered and continued racing until she retired in 2003 after almost 40 years on the strip. 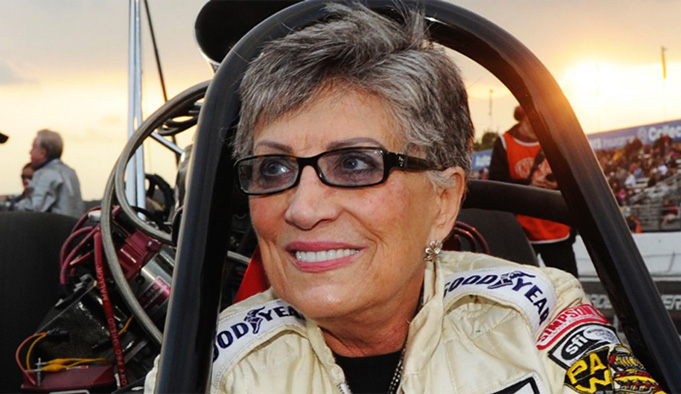 Today Shirley’s legacy is still very much alive with the racing baton in the U.S. being passed onto a new generation of female racers, most notably at this moment in time to “Top Fuel” racer Leah Pritchett who ran a storming 3.658 seconds, 329.34 mph to break the Top Fuel national time in March of this year. 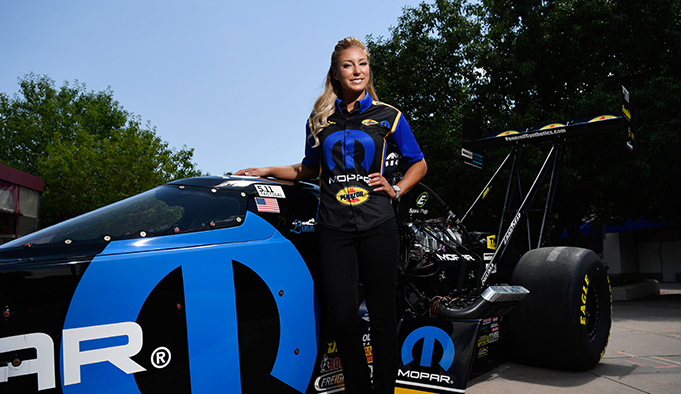 But it’s not only in the the States where drag racing has attracted the attention of women racers, here in the UK and Europe too you’ll find them competing in every category, on two wheels and four. 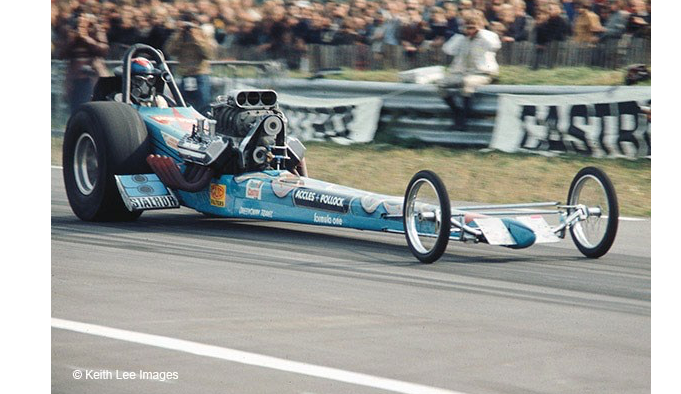 Roz Prior (above) was very much at the vanguard of women drag racers here in the UK, taking to the strip in 1973 because her husband could get comfortable in the dragster he just bought! Roz has no such problem in filling his seat. Her drag racing career culminated in 1978 driving Top Fuel Dragster called “Maneater”. In it she posted a best of 6.42 seconds ET which stood as the record for a British female driver for 20 years. Roz was elected to the British Drag Racing Hall of Fame in 2008. 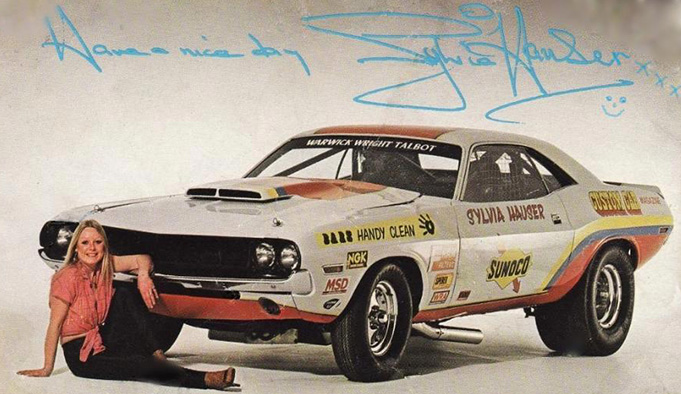 Talk of fast ladies (sorry!) wouldn’t be complete without a mention of Sylvia Hauser, “Queen of the doorslammers”. Sylvia was the first driver (male or female) to take all 5 National Titles in one year, and she repeated this feat in 1979, 1981 and 1983, which earned her yet another title of Britain’s winniggest(!) drag racer. 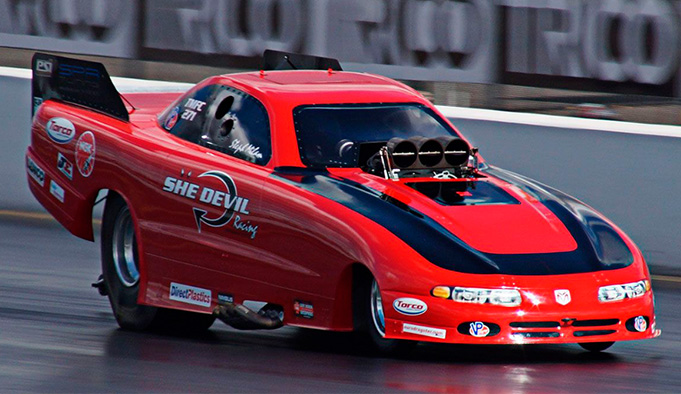 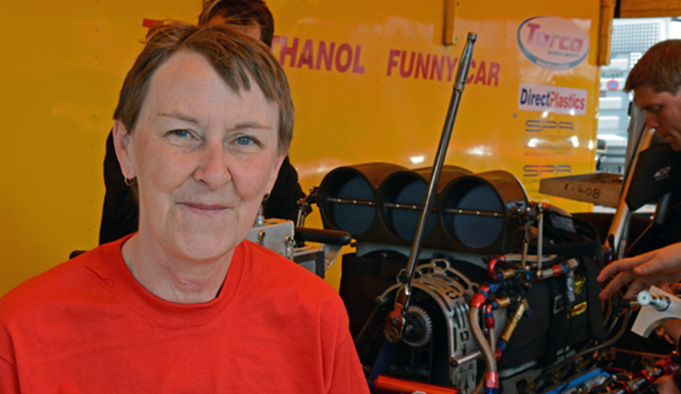 Fast forward to today and you’ll find Steph Milam (above), Tunbridge Wells travel agent and holder of the “Fastest Female Funny Car Driver in Europe”. Steph’s team, She Devil Racing, has been competing in funny cars for over ten years, finally break into an exclusive group of five second racers having posted a 5.98.235mph run.  And she’s now been joined in the same class by a young pretender from Norway, Birgitte Bremnes, driving her ‘Gladiator’ funny car. 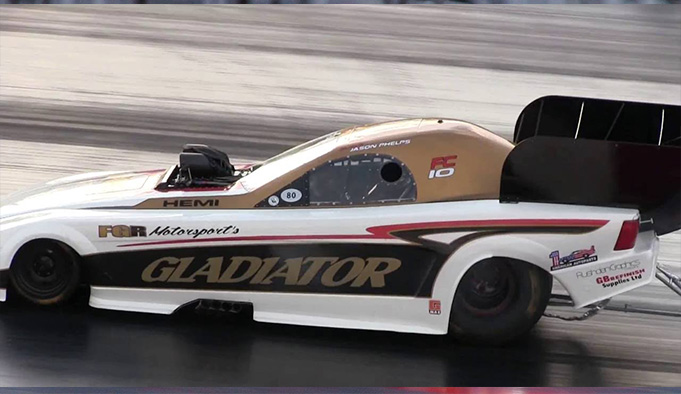 If you’re looking for more winners, then Finnish chicken farmer Anita Mäkelä (see below) who took her second FIA European Top Fuel Championship title last year is very much at the top of the drag racing tree. And this year she seems determined to make it two titles back to back. But she’ll have fierce competition, not the least of which will be from another female competitor, Jndia Erbacher. She’s the face at the top of the page in a picture taken moments before she blasted to 4.09 at 272 mph! 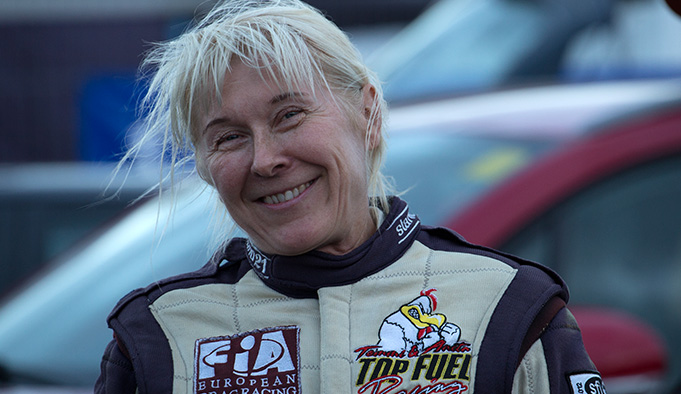 Jndia comes from something of a drag racing dynasty with her father Urs, who is a multiple winner with six European titles to his name in funny cars and Top Fuel. Racing alongside her she’s no doubt she’s benefiting from the experience of his winning ways. But one suspects he hasn’t told her everything quite yet!

And there are more, competing at all levels in the sport and very much giving their male counterparts a run for their money.

So, when you factor in the numbers of women in the sport, which are still far fewer than men, but growing rapidly, it starts to look as if men have more than met their match on the drag strip. And if recent events in the US are anything to judge by, an all women European final in the 10,000+ horsepower behemoths known as Top Fuel must be just around the corner.