To finish first, first you have to finish

Close to the edge

The term ‘gentlemen racers’ is not an unfamiliar one to race fans. If it wasn’t for those enthusiasts who are willing to put their money were their mouth is then, quite often, many series would be decimated or totally disappear from the racing calendar. What’s more fans would be denied the pleasure of seeing some pretty exotic machinery on racetracks up and down the country.

One such series is Britcar Endurance Championship. Since its foundation almost 20 years ago, the Championship has had a fairly simple ethos. “To promote affordable and realistic multi-class endurance racing in the UK, in a format where “Gentleman” drivers, hobbyists, professional racers and up-and-coming youngsters can achieve equal success in GT Supercars, production-based sportscars, Touring cars and Hot Hatches.”

That might sound like a bit of a bucket shop of racers and cars brought together because they simply couldn’t find a home elsewhere. But at the heart of it is really a very similar principle to that employed at the daddy of all endurance races, Le Mans 24 Hours. Since its inception it has attracted entries from all corners of the sports and saloon car world with drivers of equally diverse backgrounds. Now it’s true to say that perhaps the mix on track isn’t quite as eclectic as it used to be, but safety is one very good reason for that, but the basic principle still holds true.

So you could say that the Britcar Endurance Championship is a lesser, but far more accessible sibling of the WEC (World Endurance Championship). The championship has a multi-class system to accommodate the diversity of the cars on the grid. There’s a two-driver format with pit stops, refuelling and tyre changes which involves a real team effort and reflects the true spirit of global long-distance racing. See just like Le Mans!

Now without wishing to sound rude, the driver we’re putting under the spotlight, Jon Watt, probably doesn’t fall under the heading of ‘gentleman racer’  (Sorry John no offence meant!). He’s more of a hybrid. Still at University studying Mechanical Engineering, while building a racing career. When he’s not studying or racing, he’s works as an instructor (so you could find him sitting next to you at a track day at Thruxton or a Mercedes AMG driving event). The proceeds from this all get ploughed into his race budget along with his sponsors funding.

Son of a farmer, he taught himself to drive at the tender age of five careering around the fields on his dad’s farm in a battered old Volvo. In the process of mastering the rudiments of car control it gradually  became apparent to his dad who was an ex racer in his own right, that Jon might have more than the average ability behind the wheel.

Education though came first. Jon went off to Uni and to cut a very long story short, that led to him getting his ARDs licence as a way of funding his racing ambitions through coaching drivers on experience days.

His first real foray into racing was competing in the BMW Compact Cup. That didn’t start too auspiciously as he was left on the line, wheels spinning, realising he’d never practised a racing start before…but he quickly recovered and fought his way from 32nd to 17th by the flag. There followed three seasons in the BMW series where he learnt his race craft and progressed steadily up to poles and podium finishes.

Apart from a couple of one-off drives, Jon then took last year out to gather together the budget for his next step, entering the Britcar Endurance Championship driving a custom built BMW M3 CSL. Now at this point we should explain how the championship works. Basically the cars are divided into five classes and points are awarded for position within class, plus there are prizes overall for each race of which there are two at every one of the seven rounds. A 50 minute “sprint” and a longer two hour endurance. That means whether you’re driving a Ferrari 488 (three teams are) or a Smart Four Four (only one taker there), everyone is competing more or less on an equal basis. So it’s not the fastest car that carries off the title, but rather who gathers the most points within their class. 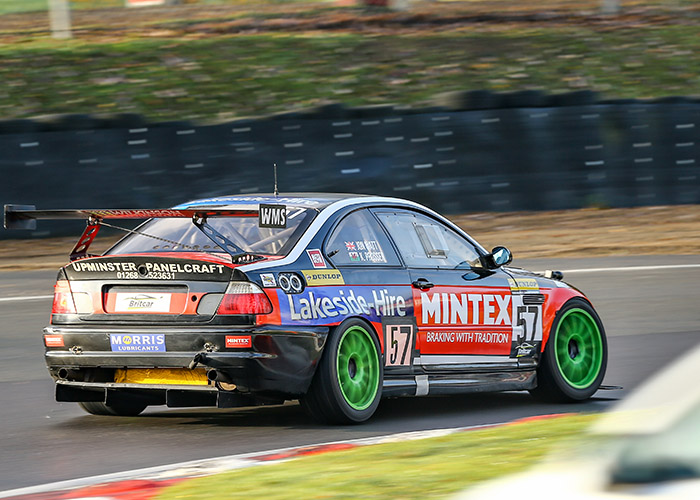 Teamed up with fellow wannabe WEC endurance racer and race instructor Kristian Prosser, the pair have made an impressive entry into the championship amassing 6 class pole positions, 7 class race fastest laps, 10 class podiums, 6 class wins and one overall podium. All that hard work meant that coming into the last round they had opened a 42 point gap to their nearest rival, but with 63 points available it was by no means done and dusted. Oh and one other thing. Neither Jon nor Kris had raced at night before and both races at Brands would be held in the evening! 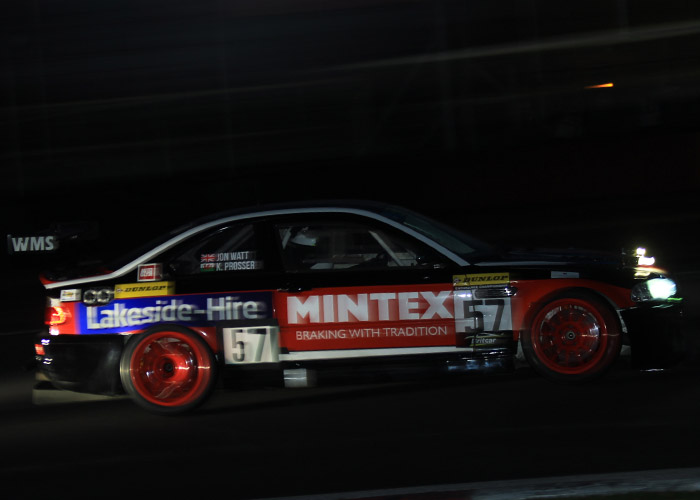 After a less than easy start to practice and qualifying (an off-on Friday damaging the front of the car including the steering rack and power steering pump plus bodywork), the first race went none too well with a major gearbox problem taking the guys out just two laps into the race. That resulted in narrowing their championship lead to just 24 points…no pressure then.

After a tireless session by mechanics Ed, Ash and Lewis, the repaired gearbox was refitted and the car made ready for Sunday’s race.

A great start by Kris augured well but success penalties, added to their pitstop, dropped the car well down the race order setting a tough target for Jon to beat. Lapping over three seconds a lap quicker than the other cars in the race the gap narrowed rapidly. Then on the final lap, another competitor suffered engine failure and in the process deposited his oil all over the racing line at Druids hairpin. Jon arriving at full chat, unaware of the oil, span but fortunately avoided contact. 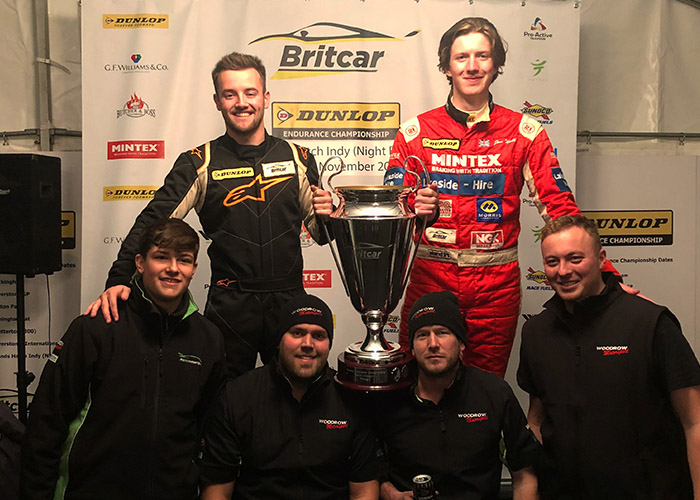 Anxious moments followed while he tried to restart the car and finally it coughed into life and Jon brought it home in third place. Thereafter still more anxious moments awaited the team as scrutineering took place and points computed. Then came the result…

The Moss Motorsport Team of Jon Watt and Kris Prosser had won the Britcar Endurance Championship (by a mere seven points) at the first attempt!

With the championship under their belt, the guys are looking at how they can take the next step in to British GT. It won’t be easy as the budgets alone are in telephone numbers in comparison with the near six figure sum their first Britcar season has cost. Time alone will tell if they can make the leap. But for now they’re happy to bask a bit in the glory of being the 2018 Dunlop Britcar Endurance Champions. And why not. It’s not every day you’re a champion!